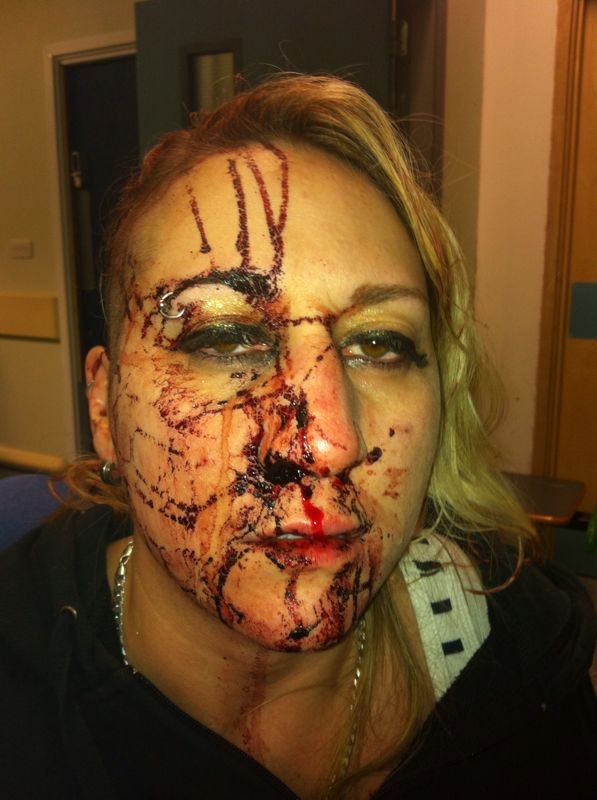 Yesterday (16/06/12) whilst Ryan and I were out canvassing businesses in Soho to support the ongoing work of 17-24-30 we bumped into Zan Goodwin on her way to work.

You would hardly recognised Zan from the photo above, but this is what she looked like after a horrific attack that took place last December. It was the week before Christmas and Zan had been out with a group of friends, down at the TwoBrewers in Clapham.

Zan told us what happened:

“I s attacked on the morning of Dec 18th 2011. I was out in Clapham with a group of friends and my partner at the time. Leaving the bar we got separated so I called her on her mobile. Whilst I was speaking to her waI could hear some vile comments being made in the background so I became desperate to find her.

When I found her she was surrounded by five young men. The things said were vile and homophobic “dyke” “need to be sorted” ect. When I arrived and challenged the abuse it was then directed in my direction. I asked for an apology. One of the young men made another comment and then fled. My gut reaction was to follow him which in hindsight was a probably not the best thing to do.

I was attacked from behind with what was I suspect was a  metal bar. Leaving me bleeding in an alley way where I was later found by a stranger. An ambulance was called and I was taken to hospital. My nose had been broken and my septum deviated, leaving me with black eyes and a nasty gash across my nose.

Since then I have had to have my nose reset and I am currently waiting for a second operation to rebuild my nose (plastic surgery). I have been left unable to breath properly, which also affects my sleep, taste and smell.

The police came to the hospital to take a statement and photo of my injuries, although I am disappointed as there has been little contact since then. Later I made a statement but was told a couple of weeks later that unfortunately the CCTV has been wiped. It seemed to me that it took the police too long to try to get the CCTV and I’ve had no after-care or advice on what I should do to follow-up on what has happened.

“I am a gay women and I’m proud of that. Women get attacked too, the physical  scares will heal but emotionally it’s difficult. Some days looking in the mirror is hard as this is not my face. As a woman to have this done to my face I can’t express what this has made me feel like. And it being done by a man……”

Ryan and I chatted to Zan about her experience and she is determined to share her story so that others (especially women) can be alerted to the dangers that still exist out on the streets – she mentioned that there have been recent incidents in Soho that have not been reported.

With World Pride and the Olympics just around the corner London is about to get very busy, people need to know that the streets are not as safe as they should be. Zan says she wants to highlight that attacks that are taking place on Women – which rarely seem to get reported, especially in the LGBT press.

She says she is in the process of setting up a petition on the Home Office Petitions website, (we will add an update link once it has been confirmed) and is in contact with Diva Magazine and the Candy Bar.