Jersey is the largest of the Channel Islands, between England and France. A self-governing dependency of the United Kingdom, with a mix of British and French cultures, it’s known for its beaches, cliffside walking trails, inland valleys and historic castles.

It is also the first of the Channel Islands to declare that it is taking part in National Hate Crime Awareness Week this year. We just added a marker to the NationalHCAW Google Map 2019. Click here to view the map on the national NationalHCAW website.

Reported in the Jersey Evening Post, the first campaign began on the 10th June, FLYERS are due to be distributed Islandwide and adverts screened on TV from today as the States police launches its first ever hate-crime awareness campaign. 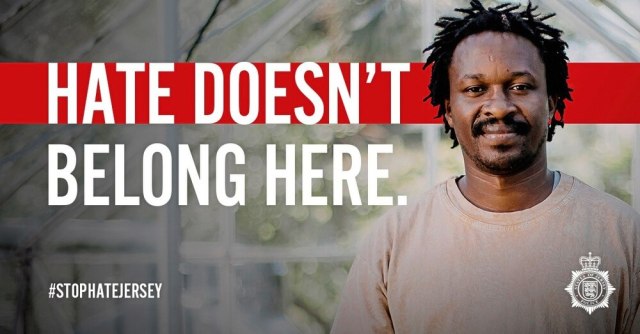 The force are hoping to encourage more victims of abuse to come forward. Last year 37 reports were made – 26 relating to abuse concerning race or religion – but figures suggest that this is just a fraction of the problem.

Acting Inspector Manny De Freitas, the States police lead on the campaign, said: ‘In launching this campaign, we want to encourage victims in Jersey to come forward to report incidents of hate crime. Only by reporting it, and perpetrators being brought to justice, can we stop it from occurring.’

A dedicated section of the States police website was also due to go live today and certain police vehicles are to be branded with the campaign’s artwork, which includes the slogan: ‘Hate doesn’t belong here’. Adverts are also due to appear in parish magazines.

Charity Prison!Me!NoWay!!!, which educates children about the consequences of crime, is to hold a range of lessons in all secondary schools and at Highlands College on hate crime in June and October this year.

Hate crimes are offences that are aggravated by prejudice against a person’s gender, race, religion, sexuality of disability. Currently, prosecutors must prove that a crime, such as assault, breach of the peace or malicious damage, has been committed with hate as an aggravating factor.

Under a proposed new Hate Crime and Prejudice law, which is being drafted and is due to go out to consultation later this year, police powers are due to be ‘greatly enhanced’ which could result in more offenders appearing in court.

Jim Hopley, chairman of the Community Advisory Group, said: ‘The occurrence of hate crime in all its manifestations, including via social media, is something we should be aware of.

‘When suffered or witnessed we can, and should, do something about it in the certain knowledge that wherever possible action will be taken to stamp this insidious crime out.

‘This campaign, fully supported by the Community Advisory Group, invites us all to recognise hate crime and to play our part, working in partnership with the police to stand against it.’

A second part of the States police campaign is due to run in October to coincide with National Hate Crime Awareness Week.

Are you organising an event for National Hate Crime Awareness Week? Check out our Planning your NationalHCAW page on our national website and make sure you register you event so we can publicise it through our News and social media and place a marker on our NationalHCAW Google Map 2019.

Founder of 17-24-30 No to Hate Crime Campaign. I am passionate about tackling all forms of hate crime and an advocate of the #LoveNotHateCommunity
View all posts by Mark172430 →
This entry was posted in Uncategorized and tagged @NationalHCAW, Hate Crime, Jersey, National Hate Crime Awareness Week, National Website, NationalHCAW Google Map. Bookmark the permalink.